Recently, NASA released an enigmatic announcement that proclaimed, “Mars Mystery Solved,” without offering many details. It left the public wondering if NASA finally found those green-skinned Martians. Had they established communications with other forms of life?

The secret, although less exciting than Martians, is groundbreaking. Scientists have discovered periodically flowing water on the red planet.

The search for water is nothing new; scientists have been investigating for years, starting in 2011. There has been enough of evidence to support the idea that Mars was once a wet planet, such as the dried-up river valleys and the presence of chemicals that require water to exist. However, Mars is currently an ice-cold desert; scientists have inferred that most of its water has boiled away into space, leaked into its interior, and frozen solid on its surface. 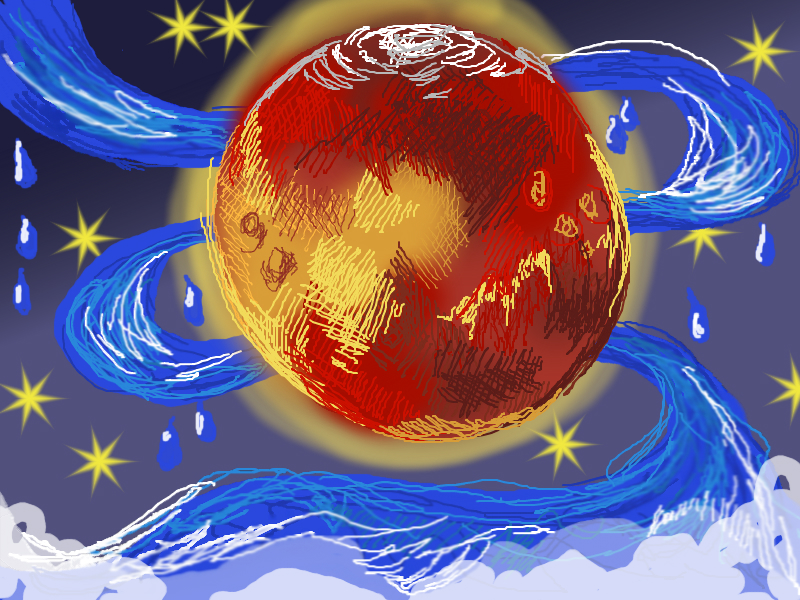 In 2011, Lujendra Ojha, an undergraduate student at the University of Arizona, noticed dark streaks on the sides of several Martian craters. The streaks seemed to darken in the summer and fade in the winter. He tentatively categorized them as “recurrent slope lines,” or RSLs.

Ojha’s latest study examined the RSLs from four different parts of Mars by using spectroscopy,  the scientific technique of interpreting a substance’s composition by analyzing the amount of light it reflects. He discovered that all RSLs contained compounds that act as antifreezes, such as magnesium perchlorate, magnesium chlorate, and sodium perchlorate. Since RSLs contain these compounds, this lowers water’s melting point by more than 70 degrees celsius, enough for ice to melt in the Martian summers. The water produced is not pure water, rather it is “briny”, or salt water.

There are still several loose threads, such as figuring out where the water comes from and where to go from here. The search for Martian life will be more difficult than the search for Martian water. It is technologically impossible to look at bacteria from orbit, and the Mars rovers are inhibited from investigating the planet by NASA’s “planetary protection “ rules. The rovers may contaminate delicate ecosystems and mess up readings. NASA is working on sending uncontaminated rovers into space, but it will be very tricky.

What does this mean for the human race? For one, the presence of flowing water, even briny water, means that life does exist. Whether in the form of bacteria or other organisms, there is life present on Mars. This is exciting because we may be closer to discovering complex life forms on a planet other than Earth.