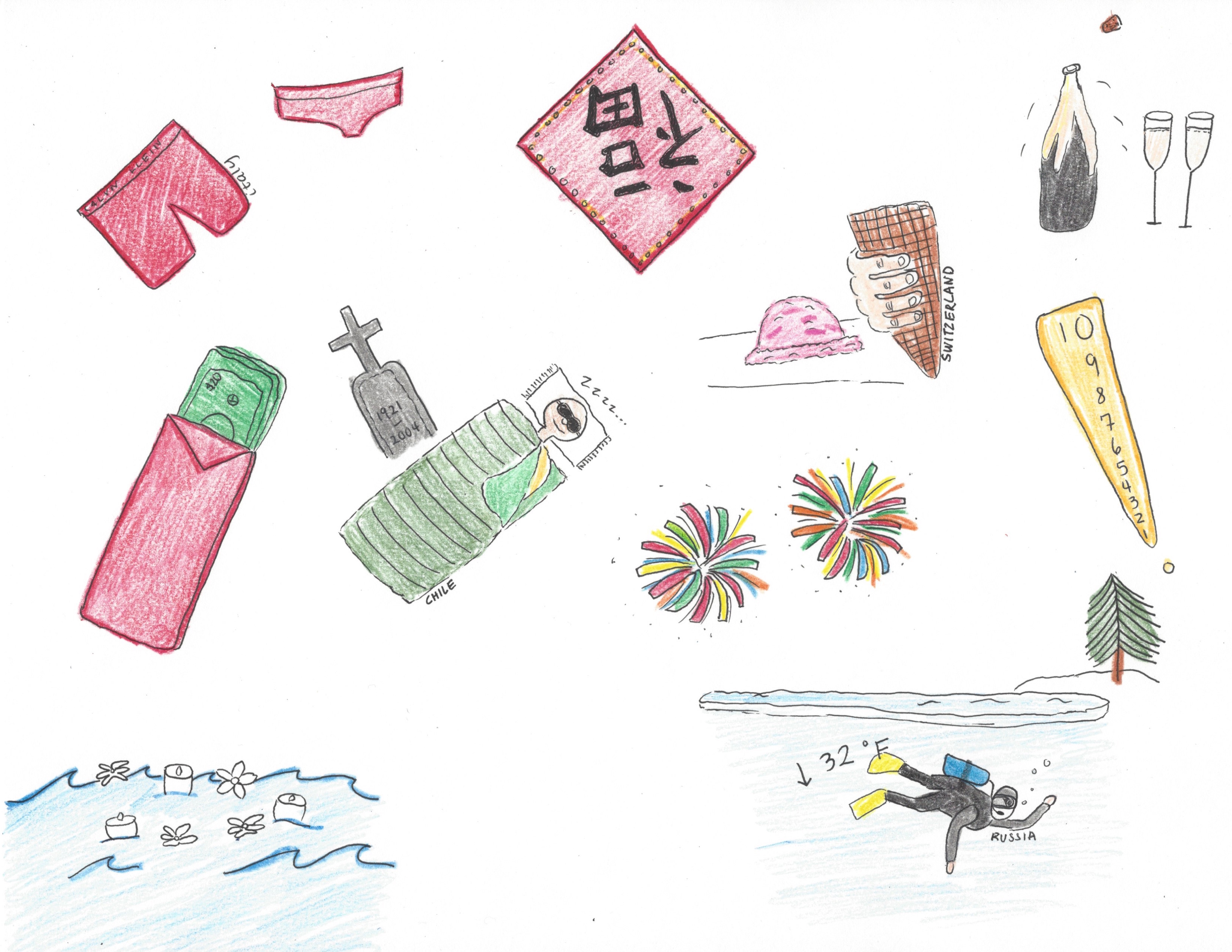 On the last day of the year, thousands of people cluster together in Times Square, eager to watch the famed ball drop from the sky. This concept is a normal one, right? In America, yes, but nearly every country in the world offers their own way to celebrate the new year. The new year brings a universal feeling of excitement and ambition, providing all people, regardless of geographic location, with a clean slate. New Year’s traditions are said to bring good fortune and prosperity, promising a good year ahead.

In Scotland, it is not uncommon to wield large fireballs on New Year’s Eve. This 100-year old stunt is done annually at the Hogmanay fire festival, a parade that happens right before midnight. Do not be concerned, there is an explanation behind this: It is said that swinging this “stick of fire” alludes to a pre-Christian ritual to ward off evil spirits, in hopes of having an upcoming year of purity.

In the region of Russia known as Siberia, divers who are brave enough plant the “New Year’s Tree” underneath frozen lakes. The “New Year’s Tree”, like a Christmas Tree, symbolizes Father Frost’s arrival, yet planting this tree also represents starting over. Jumping into a frozen lake is just one activity to enjoy at the end of the year in Siberia.

Many locals in Brazil celebrate by wearing white apparel and throwing white flowers or candles into the ocean as the year turns over. By taking part in this activity, one makes an offering to the Afro-Brazilian Goddess of the Sea, named Lemanja. If your sacrifice returns washed up on the shore, this symbolizes Lemanja’s rejection of it. However, there is no punishment penalty towards this. The Goddess of the Sea is known to bless mothers and children as well, and offerings to her are known to bring success for the upcoming year.

On this holiday of new beginnings, some cultures express certain colors, particularly red. During the Chinese New Year, occurring in February, people paint their front doors red, due to the color representing good luck in their culture.

Other traditions across the world include sleeping over in a cemetery in Chile to whispering to animals in Romania, truly exemplifying the variety of tradition seen around the world in welcoming the new year.

Although our New Year’s traditions across the world may differ, during this time of year everyone has a renewed outlook on life, the purity of the new year giving us motivation to succeed. This last year has given us plenty of ups and downs, but taking those mistakes or achievements and implementing them into 2019 will make this year the most successful yet.