Asian hate crimes have always existed. Since the first wave of Asian immigrants from China flowed into America in the 1850s, Asian Americans have been persecuted through physical and verbal abuse by individuals as well as by the U.S. government. As racism began to be recognized as a public health crisis, more awareness has been brought to racially fueled hate crimes and the government made attempts to bring around change. However, Asian hate crimes were still largely swept under the rug. Asians were labeled a “model minority,” and America moved on from there.

But with the COVID-19 pandemic, which originated in China came a nearly 150% increase in Asian hate crimes in 2020. It became more apparent than ever that racism against Asians was still real and had real, harsh consequences. The “model minority,” a myth perpetrated by white Americans that Asian Americans achieved the American Dream through hard work and virtues rather than severe selectivism of the rich and educated, was a cover-up for the reality of Asian discrimination. The Atlanta spa shooting, in which a white man shot eight victims at Asian spas, six of whom were Asian, served as a catalyst for Stop Asian Hate rallies all across the country.

One of these rallies happened at Van Neste Square in Ridgewood on Saturday, April 10. Locals gathered around to protest against Asian hate, including many RHS students. Asking about what stood out about the rally to the students, one said, “The amount of people who showed up to support and the diversity of people, how well it was organized, and how so many people had signs to strengthen the support.” The rally had inspired many people to share their stories, and one student reported that “some of the speakers [were] in high school.”

One such speaker was Christina Huang, a junior at RHS. “For a really long time I had internalized the racism and I tried to cover up my Chinese roots because I felt ashamed of it. But I am so fortunate of having the honor to tell my experiences and thoughts,” she said. “I am also thankful for people coming up to my afterwords thanking me for sharing my story and sharing how many of them could resonate with my experiences. I also saw that there were many younger kids in the audience, and my hope is by participating in this rally they can understand that their Asian roots are something they should take pride in and something they should not be ashamed of.” Christina also mentioned that the thing that stood out to her the most were the other speeches. “For instance, it was really difficult to listen to but very impactful the way Van Imm talked about her experiences as a child of Cambodia refugees and forced to have the “race talk” with her children,” she said, referring to one of the speakers.

Many students also mentioned Thria Bernabe, a non-binary person of Asian descent who gave an impromptu about Asian discrimination, interrupting Ridgewood Mayor Knudsen’s speech. “[They were] talking about some really heavy things that wasn’t exactly hate crimes. It was more like things that aren’t categorized as Asian hate crimes, just discriminating Asians in general,” said one of the students. “[They] made the crowd go ‘eh.’ But the topics [they] addressed are true, even if we don’t want to face them right now.” A different student expressed similar sentiments, saying, “Thria displayed much courage when [they] spoke out against Mayor Knudsen, but I feel the whole act was kind of unnecessary at a peaceful rally.” The student added, “But pop off I guess.”

There were some things that RHS students wished were different about the rally. “The rally could have been more effective if everyone was quieter. Like, it was hard to concentrate on the people speaking when everyone around you is also talking,” said one student. This was an inevitability, given the crowd. Another student expressed other thoughts, saying, “I wish the rally had a stronger message rather than ‘we’re all Americans’ and ‘hate has no place here.’ Oftentimes non-POC allies will claim their support but have no actual incentive to act.”

However, all interviewed students (there were only three but we don’t have to tell them) agreed that the rally was essential. A student said, “As an Asian myself, this rally was important for me to show the beauty of diversity and show support for my brothers and sisters.” “This rally was important because it was finally something. I’m really glad Ridgewood addressed this topic, as it is very important in our world now,” said another student. A third student said, “As a POC [person of color] and an Asian, it is terrifying to see what can happen in communities like ours and it was nice to see that there are many there to support us. it makes me feel safer but also more alert and aware of the ideas found within our community. I also was given a chance to perform in this rally to represent my background and my diversity. It was truly amazing being able to do that to help strengthen the fight against Asian hate.” 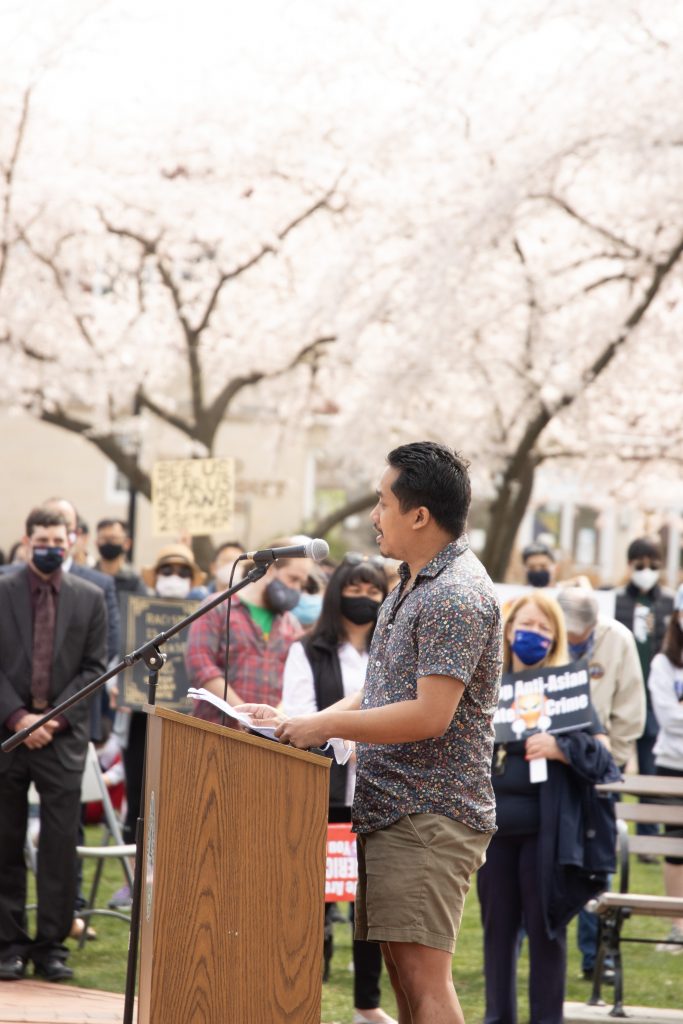