The ball drop, the fireworks, and then the resolutions. These are all staples of the New Year celebration that we look forward to. New Year’s will be here before you know it, and these traditions will be at the forefront of everyone’s mind, but where do they all come from?

The United States was not the first country to adopt the ball drop tradition. In 1883, the people of Greenwich, England dropped a ball on the top of England’s Royal Observatory at one o‘clock in the afternoon everyday to allow nearby ships to properly set their chronometers. This model inspired the installation of about 150 time-balls around the world for the purpose of synchronizing time. Even today, Washington DC’s Naval Observatory drops a time-ball down a flagpole at noon everyday.

The first New Year’s ball drop in the US happened in 1907. American immigrant Jacob Starr crafted the first ball with a diameter of five feet from wood, iron, and 100 light bulbs. It weighed 700 pounds and stood atop a flagpole in One Times Square. In 1920, it was replaced with a 400 pound wrought iron ball. In 1955, the ball was made from aluminum, and only weighed 150 pounds. The “I Love New York” marketing campaign converted the ball to a red apple from 1981-1988. 1995 was the first year that computer controls were introduced to drop the ball. The ball was remade with crystals for the drop commencing the new millennium in 2000. It now weighs in at nearly 6 tons, has a diameter of twelve feet, glistens with 2,688 Waterford Crystal triangles, and is illuminated by 32,256 Philips Luxeon LED lights.

As for the fireworks, they are thought to have originated in the 800s in China, but potentially got their start in India or Arab nations. In China, they were crafted by filling bamboo shoots with gunpowder. They were set off on the Chinese New Year to ward off evil spirits. Marco Polo is credited with bringing this technology to Europe in the late 1200s. Fireworks made their way to America in 1608 when John Smith set some off in Jamestown for both entertainment and to impress the Native Americans. They have become a popular element of celebrations in the United States. However, rather than warding off evil spirits, they mark a joyous transition to the New Year.

Finally come the New Year’s resolutions. Why are these so culturally significant? The practice dates back to Babylonian times. Babylon was the first place to have a record of New Year’s celebrations, nearly 4,000 years ago. Their new year occurred in the middle of March, and at this time they made promises to their gods that they would repay their debts. If they held true to their promises, the gods would favor them in the new year. However, if not, they would suffer the gods’ wrath. In 45 B.C., Julius Caesar established January 1st as the first day of the new Roman year. The Christian religion turned this day into one of reflection and contemplation. Over time, New Year’s resolutions have been converted into the secular tradition that they are today.

At this time of celebration, it is important to look back on our history and understand how it is that we have arrived where we are today. We have many people to thank for our holiday traditions, and would live very different lives had we not mixed cultures in the American melting pot. 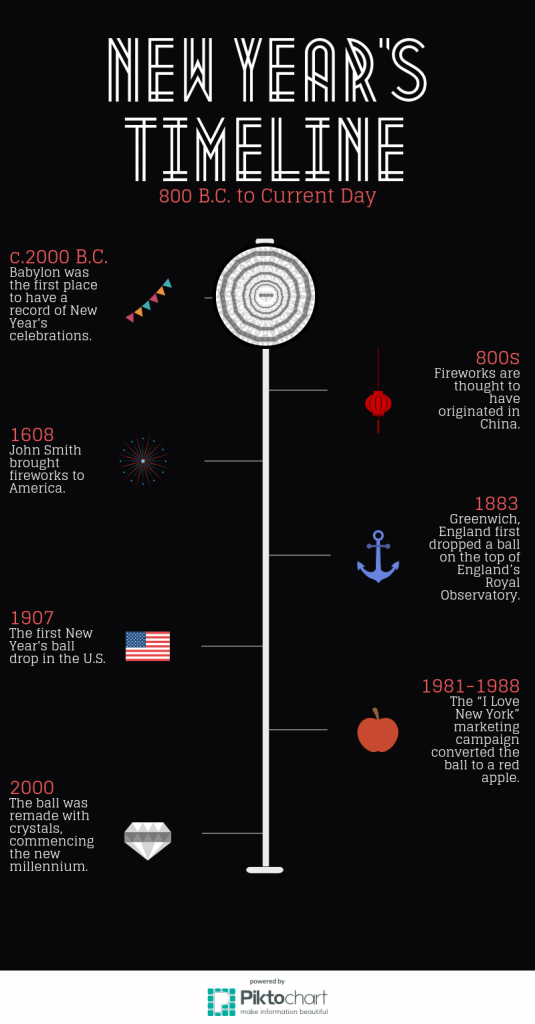