We can already hear Michael Bublé and Mariah Carey (as they begin to emerge from their caves once a year) playing in our minds. Marked by Christmas trees and holiday movies, the holiday season is well under way.

But how much do we really know about Christmas? According to recent studies by the United Church of God, the holiday is not a celebration of Jesus’ birth at all. This denomination conducted an in-depth study of the Bible in order to justify that Jesus was not born on December 25. Their research concluded with two main supports for these claims: 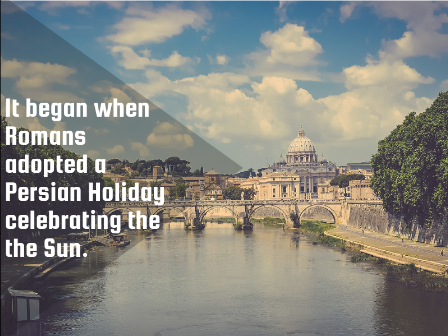 So if it isn’t for Jesus’ birth, why do we celebrate Christmas? History shows that Christmas was actually a derivation from a pagan holiday that celebrated the sun. This festival was originally dedicated to Mithra, the Persian god of light and sacred contracts, who was born out of a rock on December 25th. In the third century, the Roman emperor, Aurelian, honored Mithra by establishing a festival known as Dies Invicti Solis, the Day of the Invincible Sun, on this day. 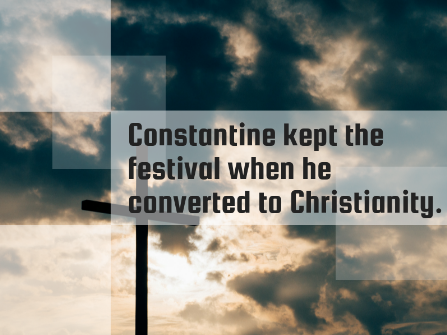 After, the throne reached the hand of emperor Constantine in 310 C.E.,who is believed to have upheld the festival when he converted to Christianity. Historians believe that he carried this major festival over to his new religion, adapting it by integrating Roman mythology. This became the first recorded time that Christmas was celebrated on December 25th- the year 336 C.E. (notice it’s not A.D.). In 350 C.E., Pope Julius I officially declared the celebration of Jesus’ birth to be on the 25th of December. 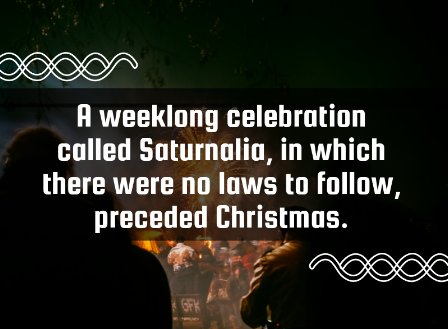 The festival leading up to December 25th was known as Saturnalia and commemorated the God Saturn; it was a weeklong celebration in which people were allowed to be unlawful without punishment (like a B.C. version of “The Purge”). However, this wasn’t so much of a murder or thriller as much as a reprieve from work and the rigid social structure, in which all people would perform charitable acts, exchange gifts, decorate trees, and feast. 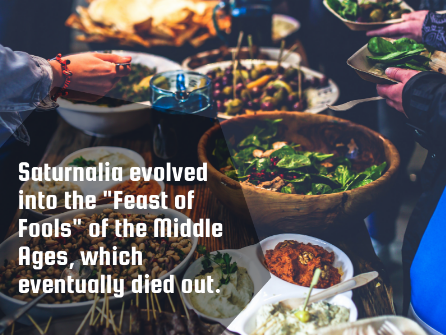 It was more of a “Freaky Friday” type scene, where social hierarchy was inverted: the wealthy paid the month’s rent for the lower class who couldn’t afford it, masters and servants switched clothes, and different family members took turns being the familial monarch. Drunk, naked, and happy, people wandered around the streets singing, an act that served as a precursor to the Christmas tradition known as caroling. The festivities of week of Saturnalia culminated in December 25, around the time of the winter solstice. 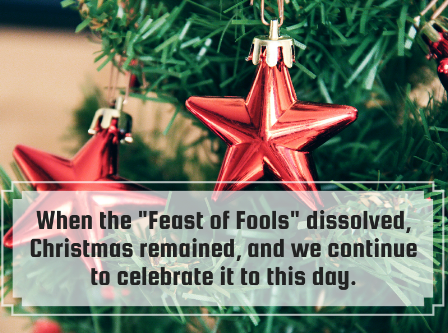 Eventually, the weeklong festival that preceded Christmas evolved into a one-day celebration known as the “Feast of Fools” during Europe’s medieval era, which soon became vulgar and uncontrollable. About two hundred years later, the Protestant Reformation condemned these politicallyincorrect manners, and resulted in edicts forbidding such “buffoonery”. So the “Feast of Fools” eventually died out and these festivals were whittled down to one day: Christmas.

Christmas’ false foundation in Jesus’ birth only shows that its meaning transcends religious boundaries; as it has proven not to be a celebration of a religious event, all that is left is the celebration of joy and kindness. It is for this reason that although we don’t all religiously celebrate Christmas, we all celebrate the feeling of merriment it creates.