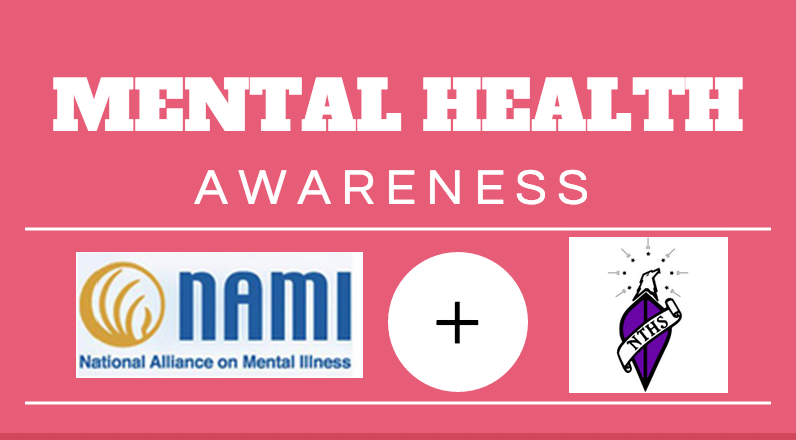 The track was adorned with green, purple, and white decorations, the colors of mental health awareness and the NTHS. Tables for food, water, and shirts were set up along the track. Julia Suh, RHS senior, managed a stand selling homemade bracelets. Jack Bird played his violin in the middle of the field, and Volume III, a band made up of RHS seniors featuring Nina Butler, Evan Beirne, Evan Westcott and Nick Heuneke, jammed out while more than 80 people walked laps around the track.

It is necessary for our society to change its outlook on mental health. As the NTHS president Poyani Bavishi said in the opening speech of the walkathon, “often times, mental disorders are not apparent on the surface, and are difficult to detect even in our closest friends.” Approximately 20% of adolescents ages 13 to 18 suffer from extreme mental disorders. Mental illnesses are more common than you might think, yet only about half of those who have mental illnesses receive the treatment they need. The consequences of no treatment are grave; mood disorders are the third most common cause of hospitalization in the US for those ages 18 to 44, and suicide is the third leading cause of death for ages 15 to 24.

According to the NAMI official website, they work to “educate,” “advocate,” “listen,” “lead.” NAMI affiliates reach out to families, individuals, and educators to inform people about mental health issues. They provide people with the “resources and skills necessary” to reach out the mentally ill. NAMI’s “HelpLine” provides information and support to those in need. This grassroots organization collects donations to promote awareness events, like the one that the NTHS hosted. Take the StigmaFree Pledge on the NAMI website and educate yourself on mental illnesses. Think about what it might be like to be burdened with an illness that people often dismiss and fail to acknowledge. Understand that people with mental illnesses deserve patience and care, just like anyone else suffering from an illness. If you are interested in donating,learning more about the organization, or taking the pledge go the www.nami.org.